This processing tank is made by German manufactoror Jobo. If you ever developed your own still films at home or in the art-school you probably know the name, it is worldfamous for its darkroom products, they enjoy a good reputation.

The processing drum comes in a solid double box. Every single piece is packed in nice red coloured paper. The set consist of the drum with a cog lid, the inner spool that can hold 15 meters of super8/single8 film, a roller block, a few spare parts and instruction. I used many processing spirals and this Jobo feels very solid, and is also very well build. As it comes out of the factory I would wash it before a first use. For loading, the super8 inner spool can be placed on the roller block easily and has a stop on one side. If you place the super8 inner spool in the drum and close it with the cog lid you have one light safe box. Ready to go. 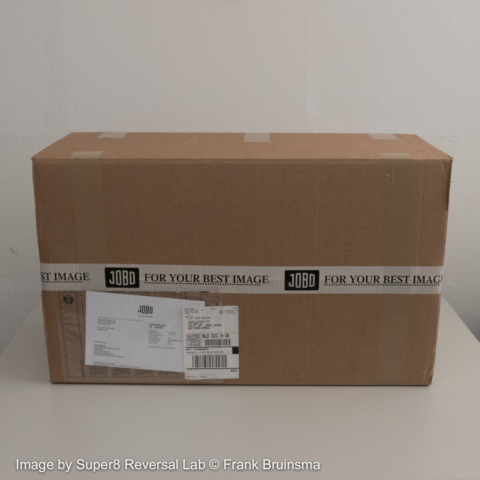 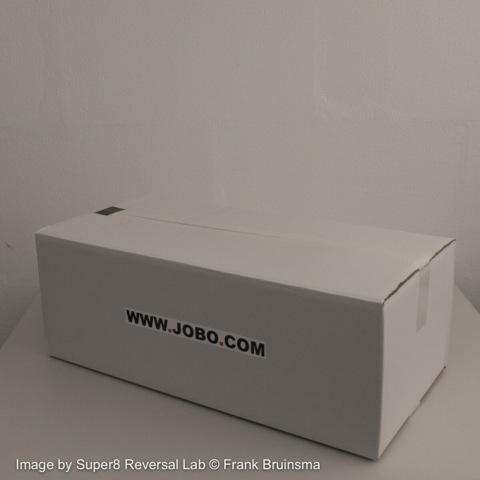 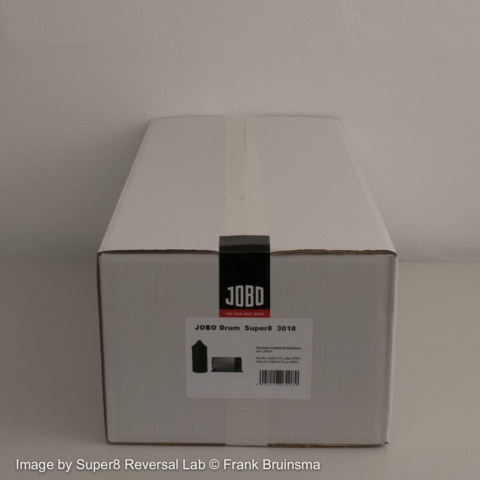 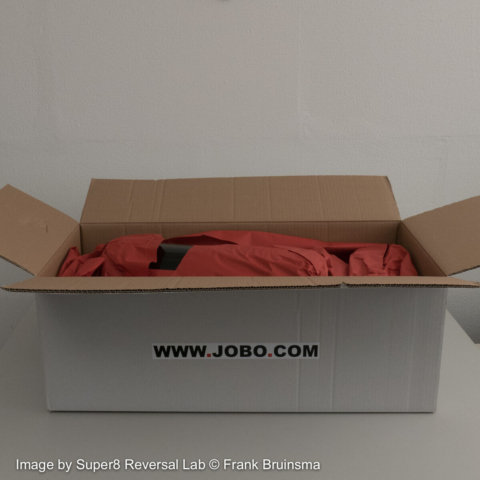 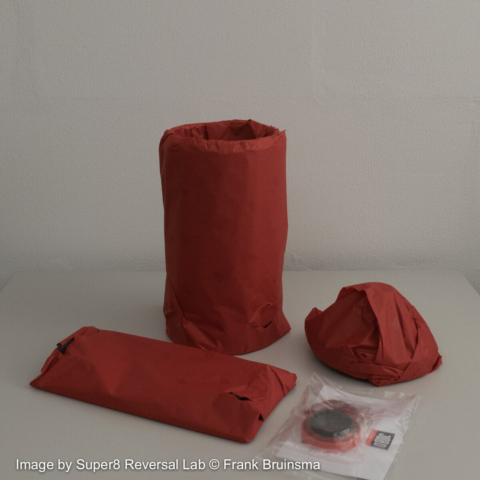 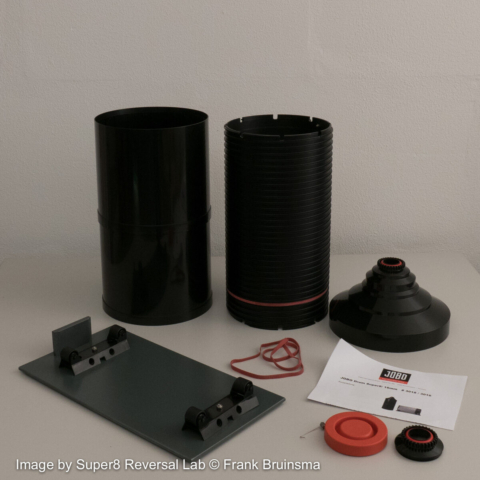 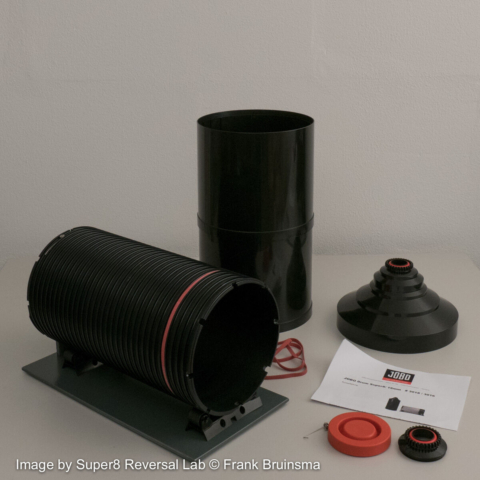 Learning how to use it

Once the processing drum is on the roller block it can be loaded with super8 film. First, I use scrap film in a daylight situation to learn how this feels. After all this must be eventually performed in total darkness. I lock the film on one side with a small pin that punches the film, and thus holds it exactly in its place. I hold the roll of super8 in one hand and turn the processing drum clockwise with my other. I must keep the film under a certain amount of tension to make sure the super8 film stays in the spiral. It is rather easy in daylight. At the end I secure the film with a rubber band. I loaded the processing drum with the emulsion side of the film outwards. Now I am ready to put the processing drum in the large tank and close the lid. I timed with my darkroom clock how long it takes to fill the complete tank with chemistry (6 seconds), and how long it needs to let it run empty (8-9 seconds). I used the clock I also use for the actual processing so you always time the exact same way. I can use this data for the actual processing. 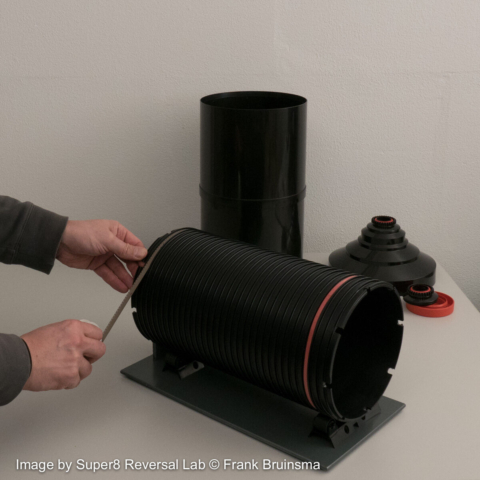 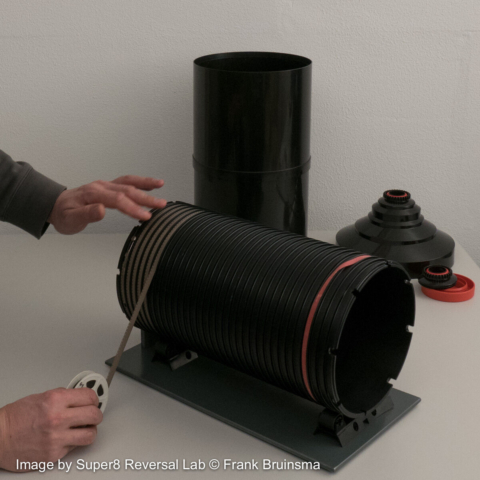 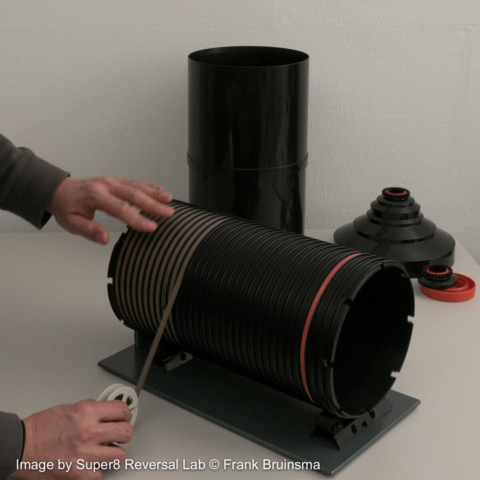 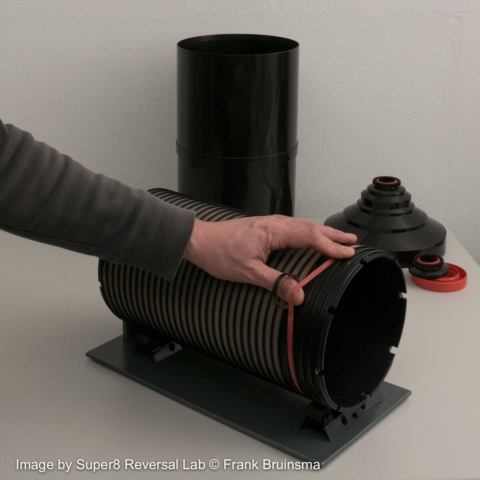 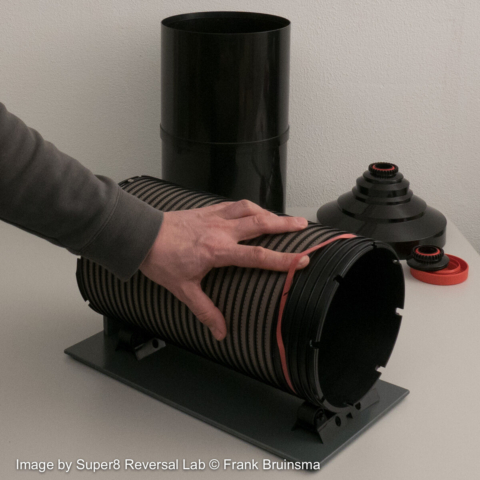 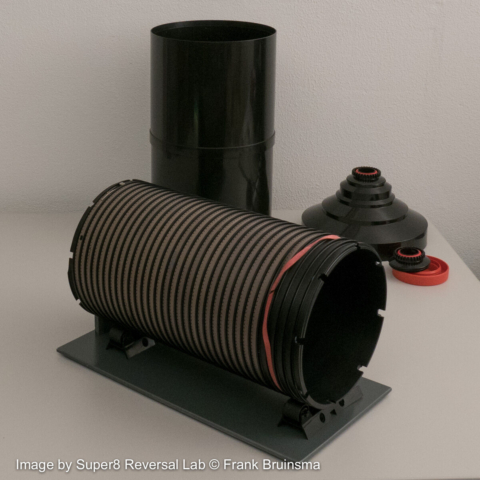 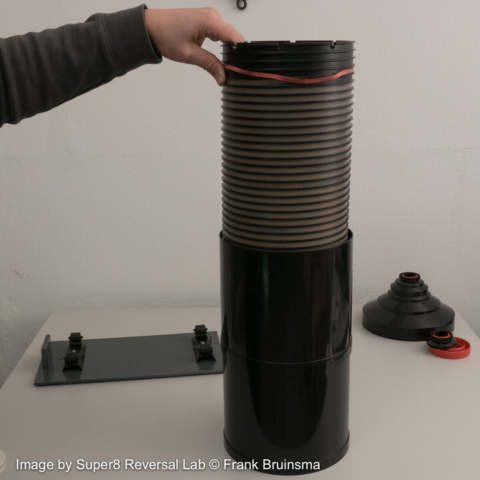 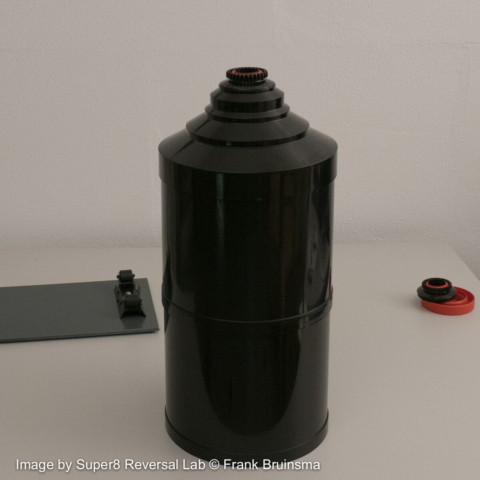 What I mainly want to test is its evenly performance. Can I get a consistent result? So I simply made one shot on a Kodak Tri-X, with a Beaulieu 7008 pro on a tripod. If you have one shot you can focus on the variations in density, spots, edges or scratches. If I would have used several shots it would have been much more difficult to notice these. Loading the super8 film in total darkness needs some practice. Read the info above. 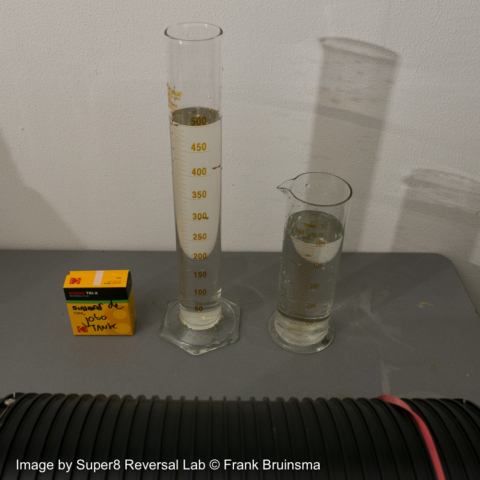 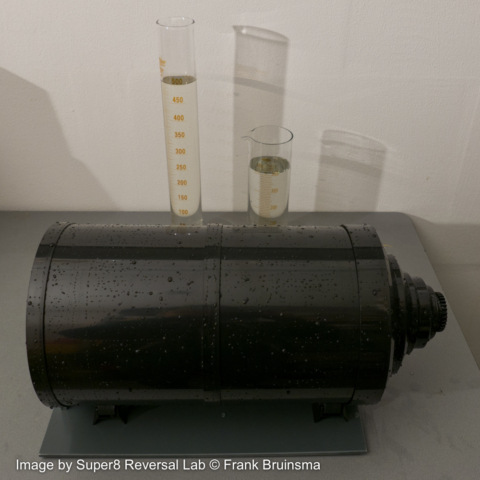 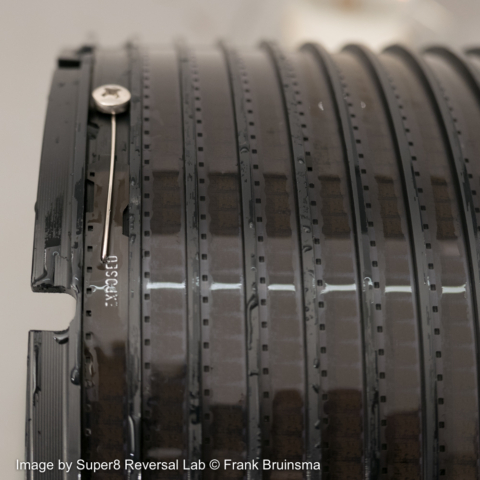 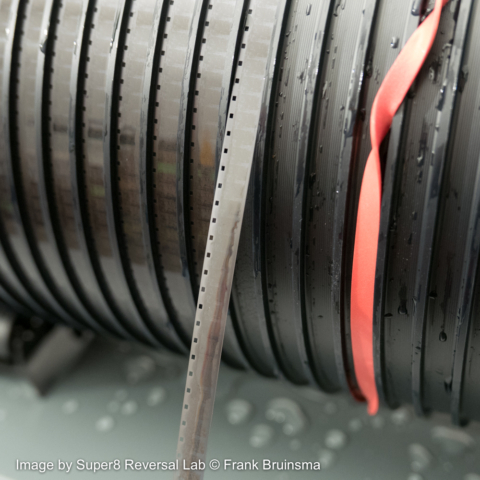 The real first development I did was a Tri-X as black/white negative. I used a basic b/w negative developer. I started with a pre wash, then first developer, a wash and then a basic b/w fixer. After a 10 minutes wash I dried the film. In the negative part you can clearly see more variations in density (see video). This can have many reasons like the type of developer, the way I agitate or that I have to practice more to get better consistent results with this b/w negative process. If you don’t see what I mean then pay attention to the dark parts, they seem to breath. 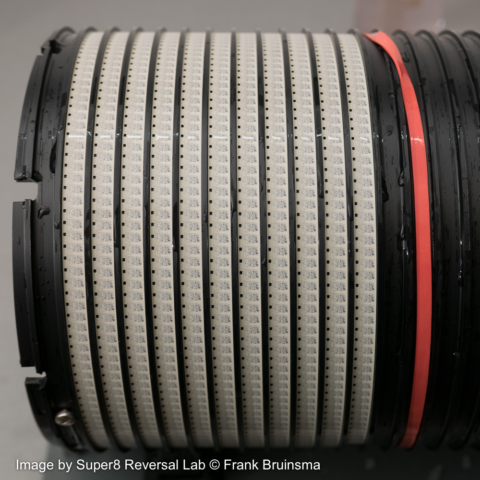 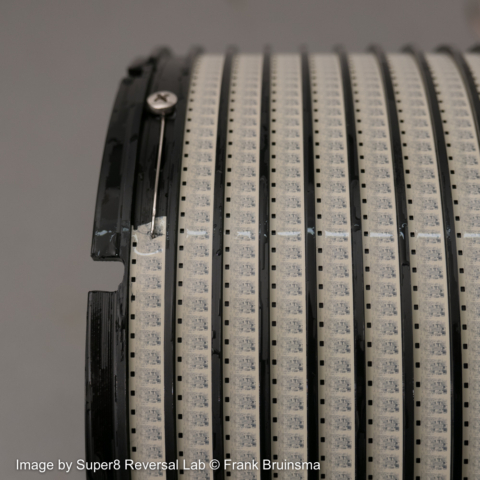 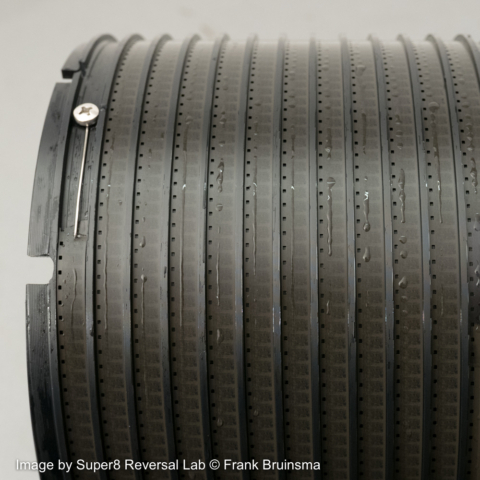 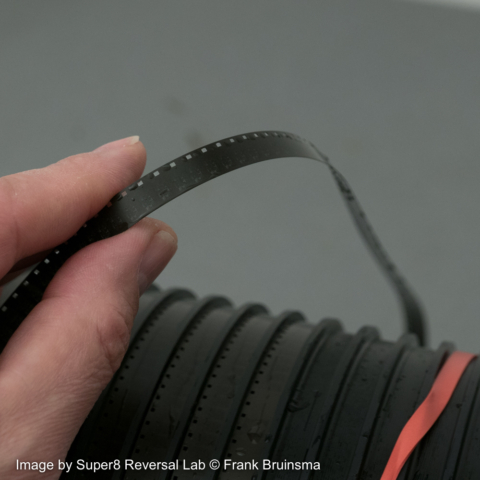 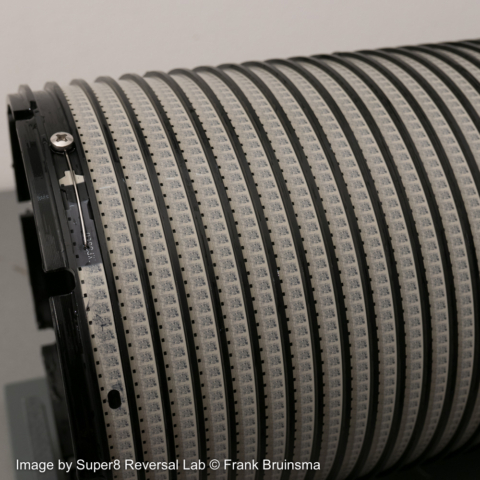 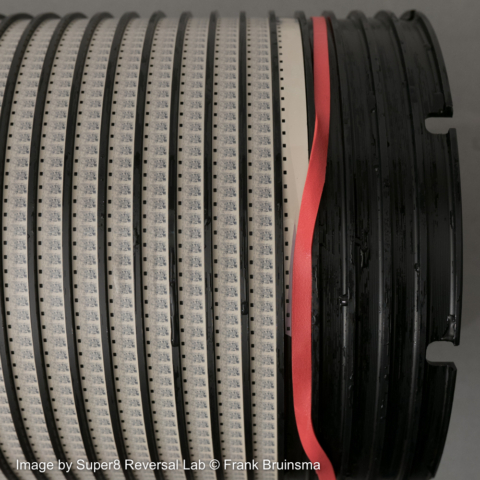 The second cartridge was developed in 1 run. So the full 15 meter film, the way it should be done. I followed the same steps for processing as the first b/w reversal part, but then I noticed that the temperature dropped by a few degrees Celsius, so I tried to compensate this by extending the first developer’s processing time. I used the exact same chemistry and recipe that I always use for Kodak Tri-X film. So I pre-wash, then the first developer, a wash, a bleach, a wash, a clearing bath. I open the tank and re-expose the film followed up by a second developer, a wash and a fixing bath. After a 10 minute wash I dried the film. Now I find this result is good. The image might be a little dark, but that isn’t important, again we should ask ourselves the question, is this evenly processed? And I say yes it is. It can be done.

Filling the tank with chemistry or water works best if you hold the tank under a small angle. The air inside the tank can then escape. I used the roller block during processing to keep the tank in movement. Make sure to change the water during the wash a few times because there will be some chemistry left from the previous bath. You want to prevent contamination.

Do not pay attention to the movement of the image in this video, this is not important now, we do not test the camera nor do we test the scanner.
I left the negative as negative in the scan, so you see the difference. I am surprised that the reversal processing looks better than the negative processing. Maybe it’s because I am used to do reversal processing? You will be happy if you can use this super8 drum together with a CPP-3 machine from Jobo. Because that will save you as lot of handling.

My general thoughts on this Jobo Expert Super8 processing drum is positive. The drum is easy to load, it is well build, you don’t need any extra’s, only a darkroom and the photo chemicals. If you don’t have the reversal chemistry for b/w you can start with b/w negative and get good results very fast. It is fun to use.

Thanks to Johannes Bockemuehl from Jobo for lending me the system.
Thank you Frans Tomeij from filmoverzetten.nl for the transfer.
And thank you André Bijma to record this voice over for me.

My only motivation to test this Jobo is to encourage people to shoot more super8 films. Because that is what we need. More super8 users. I was not paid for this and the complete set was sent back to the factory afterwards.

This test was first published on March 23, 2019 in the old version of this website.